Entertainment Why Would A Governor Not Pay Salary And Wants Re-election: Apostle Suleman - Informationng 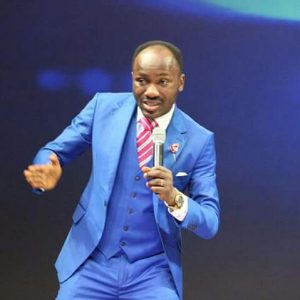 The cleric made this known via a series of tweets on his Twitter handle.

“I have a TV channel. I bought cars for all the male workers not car loans but car gifts. Nobody stays with a man who lacks human feelings. This is why some ‘big men’ die strangely. It’s because their workers are in pains, prolonged pains.

“Just saw a whole family tell me that they haven’t eaten for days. The governor hasn’t paid them for over 10months and he wants to come back? To do what? See how pale the kids look. May the Lord reward all of you wicked politicians.

“Any man who refuses to pay his workers would face the judgment of God. I have had staff for 15years and never owed salaries one day. Even when the company runs on a deficit, I do my best to pay. Workers’ welfare is key for business health/growth.” 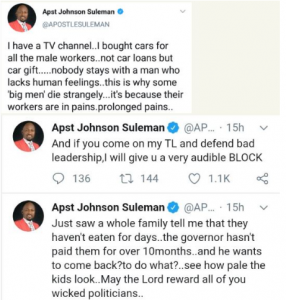 The post Why Would A Governor Not Pay Salary And Wants Re-election: Apostle Suleman appeared first on Information Nigeria.