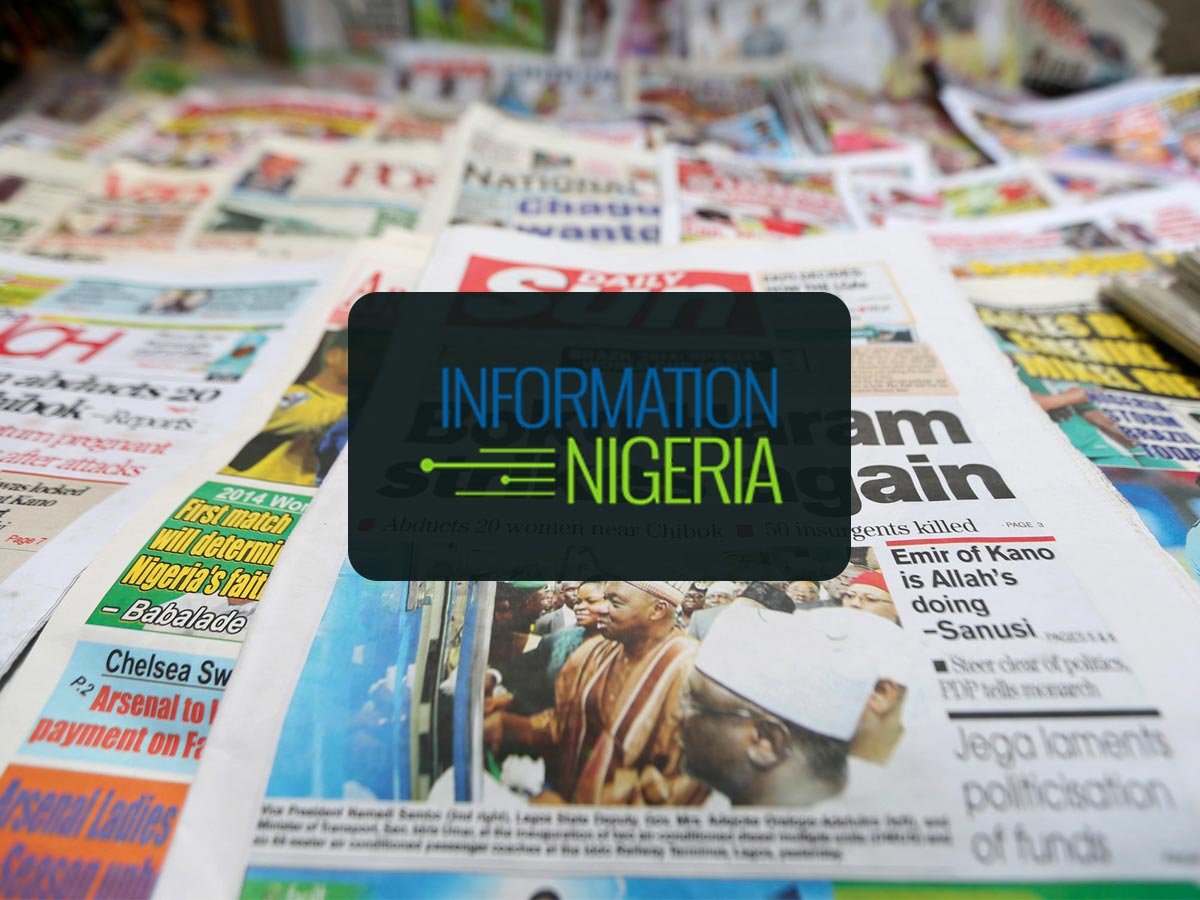 Nigerian Newspaper Headlines
These are out Newspaper headlines for today, 11th September 2019:

Be Careful What You Tweet About Kaduna, We Will Get You: El Rufai


Kaduna State governor, Malam Nasir El Rufai has issued a strong warning to anyone who intends to tweet anything about the state. The governor made this known, according to Bashir Ahmad, President Muhammadu Buhari’s aide on new media at the book launch on Tuesday in Abuja. According to Ahmad, El-Raufai says anyone wishing to tweet anything against the state must be very aware that he(El-Rufai) is watching and they have strong laws in the state to get the person.


The Presidential Election Petitions Tribunal will on Wednesday, September 11, deliver judgement in the petition by the Peoples Democratic Party (PDP) and its candidate, Atiku Abubakar challenging the victory of President Muhammadu Buhari. This was made known in a statement by the Director of Information of the Court of Appeal, Sa’adatu Musa, on Tuesday.


The negotiation between the Federal Government and the Joint National Public Service Negotiating Council (JNPSNC) on the new minimum wage has been rescheduled for September 16. This was made known to the News Agency of Nigeria (NAN) on Tuesday, by Alade Lawal, JNPSN Secretary-General in Lagos. A meeting for negotiation between the government and the JNPSNC was earlier scheduled to hold on Sept. 4, but was suspended.

Ihedioha Drags Okorocha To Court Over Crisis In Imo


Governor Emeka Ihedioha of Imo state has filed a lawsuit against Rochas Okorocha, over the accusation that the former governor for heating up the state. According to Ihedioha, Okorocha “has consistently been in the deplorable habit of fomenting trouble and inciting your supporters to disobey the government of the day.”


The police in Nasarawa have arrested two fake members of the National Youth Service Corps(NYSC), who claimed to be graduates of the Imo State University. The State Police Public Relations Officer, ASP Rahman Nansel, revealed that the suspects, a male and female, will be taken to the Chief Magistrate Court in Lafia for prosecution. The Director-General of the National Youth Service Corps, Brigadier General Shaibu Ibrahim, detected the fake corps members and sent their names to the Nasarawa State Coordinator, Hajiya Ramatu Sanda.

El-Rufai: ‘Be Careful Of What You Tweet About Kaduna, I’m Watching’


Kaduna State Governor, Mallam Nasir El-Rufai, has issued a stern warning to Nigerians to be careful of what they post on Twitter about his state. El-Rufai gave the warning on Tuesday, in Abuja, at the launching of the book “Digital Wealth,” by Japheth J. Omojuwa, a Nigerian blogger. The governor who said he was watching what people tweet about his government personally, revealed that there were existing laws to deal with any erring individual.


The Federal High Court in Lagos on Tuesday ruled that the 2,149 pieces of jewellery and a customised gold iPhone, valued at $40m, recovered from the Abuja home of Mrs Diezani Alison-Madueke should be forfeited permanently to the federal government. In a ruling on Tuesday, Justice Nicholas Nicholas Oweibo held that Diezani, through her lawyer, Awa Kalu (SAN), failed to point out reasons the items should not be permanently forfeited to the Federal Government.


The burial of Robert Mugabe, the late former president of Zimbabwe has been postponed indefinitely. The burial was earlier scheduled to hold on Sunday, September 15th in Zimbabwe, but it is not likely to hold again as family members of the deceased ex-president confirmed the development to Zimlive.


Reno Omokri, former media aide to ex-president, Goodluck Jonathan has called on President Muhammadu Buhari to avoid creating another terrorist group in Nigeria. The popular critic warned the president to desist from using violence to fight the Islamic Movement Of Nigeria group who are protesting the release of their leader, Ibrahim El-Zakzaky.


Kidnapped lecturer, Prof. Gideon Okedayo, of Ondo State University of Science of Technology (OSUSTECH), Okitipupa, has been found dead. The News Agency of Nigeria (NAN) reports that the decomposing body of the deceased was discovered on Monday in a bush where his abductors kept him.

Those were out Newspaper headlines for today, 11th September 2019: